Scootering, Sight-Seeing and Speaking in Sweden

Traveling—moving from place to another.

It’s no surprise that by personally travelling, my ideas, thoughts, feelings and insights travel too. Movement inspires movement in all facets, including my own thoughts. This series explores reflections from my travel experiences.

The trip was work-affiliated, as the team I work on at Shopify is distributed across many cities.

Namely, Montreal, Stockholm, New York, and Toronto – where I work.

The team in Stockholm was the most recent addition, and made up a large portion of the team. While we’ve been able to work remotely in the past, with the Sweden team operating in a completely different time zone, the challenges presented were different.

The team felt distant and separate, so in an effort to bridge the gap and strengthen the culture of the team, we had a team work week in Stockholm, where all members from the team flew in and met in person.

It was my first time travelling alone; by alone I mean without my family.

The trip as a whole was a really great experience, and there are an array of anecdotes and stories that I can share.

The one I feel was most touching, and perhaps loaded with most learning, occurred on the last day. 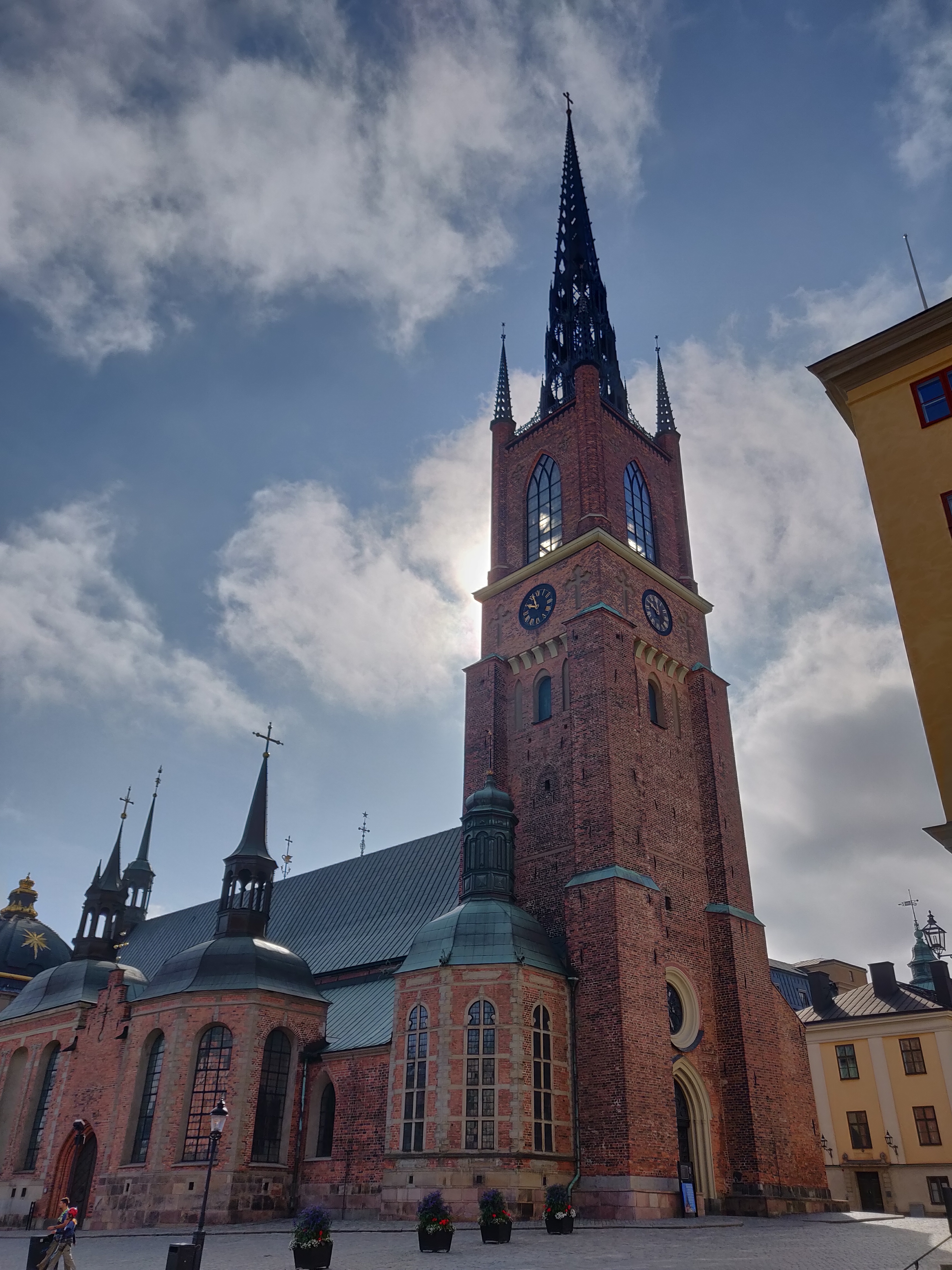 The work week had come to an end. The days of the work week consisted mostly of: heading from our hotel to the office, working alongside fellow colleagues on a project, and ending the day off at a new restaurant.

Don’t get me wrong – it was extremely fun, I was able to meet and learn from a bunch of new people, and try some extremely tasty food. All in all, it was a fantastic time. 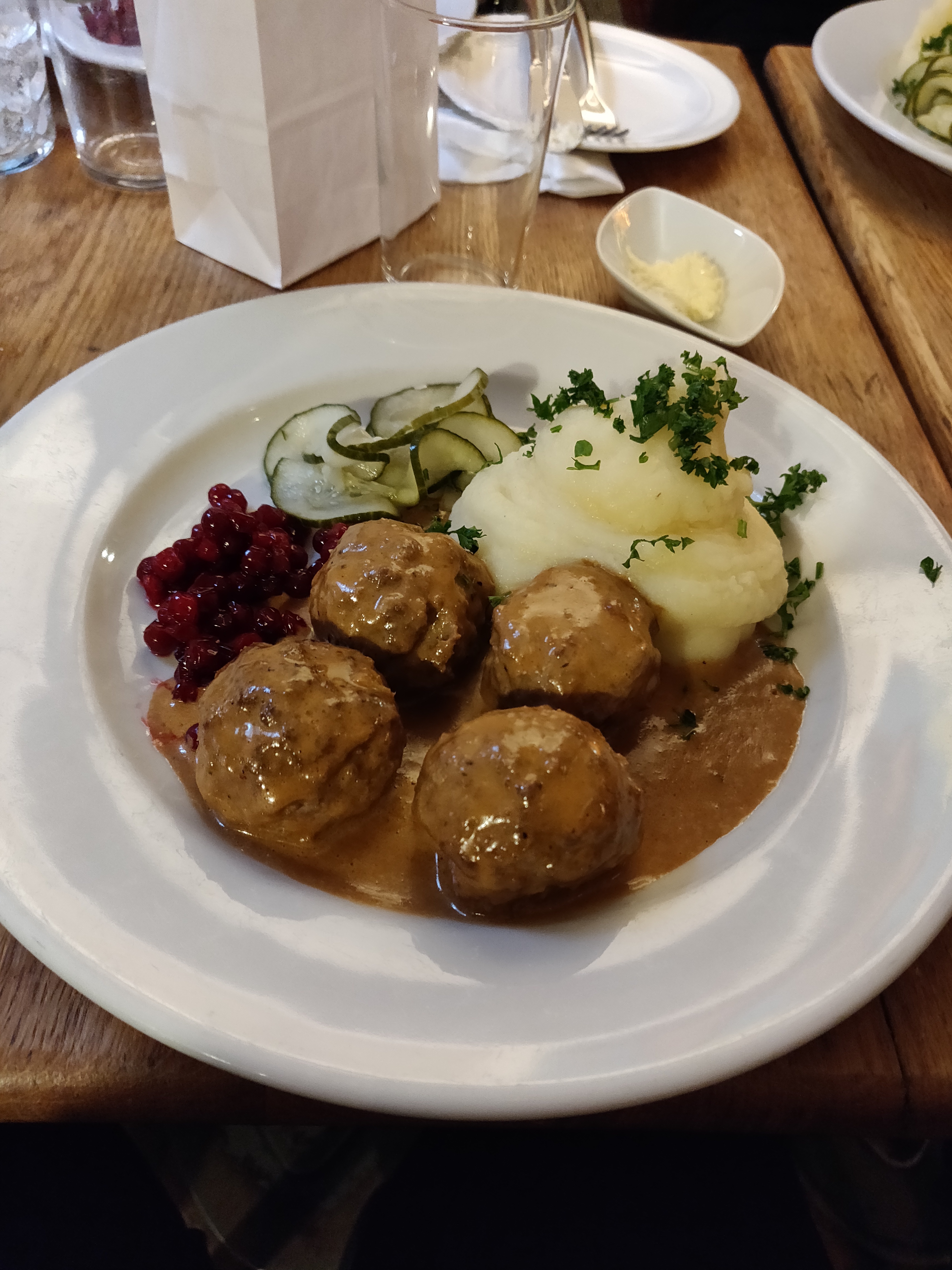 On the last day, though, I realized I hadn’t done much exploring, and the trip felt incomplete. It comes back to theme of being present.

I had felt as though the week progressed on cruise control and I hadn’t yet had the chance to take a minute, breathe, and truly experience the city.

So, having had this realization, I had a newfound excitement for the exploration I was about to embark on.

The night before, I made sure I packed all my bags, and slept early. I started the next day early, grabbed breakfast, and got started.

I made it a point to go alone. I didn’t really want to actively talk to anyone so as to ensure I could be present wherever I ended up.

The experience was one of the most enjoyable of my life.

Stockholm has adopted the “pick-up and drop anywhere” electric scooter culture, so naturally, I hopped on one and began to cruise into the Old Town. This is an area of Sweden that dates back to the 13th century. As such, the architecture and design of the area draws semblance to older styles featuring cobbled streets, narrow alleyways, and coloured town houses. 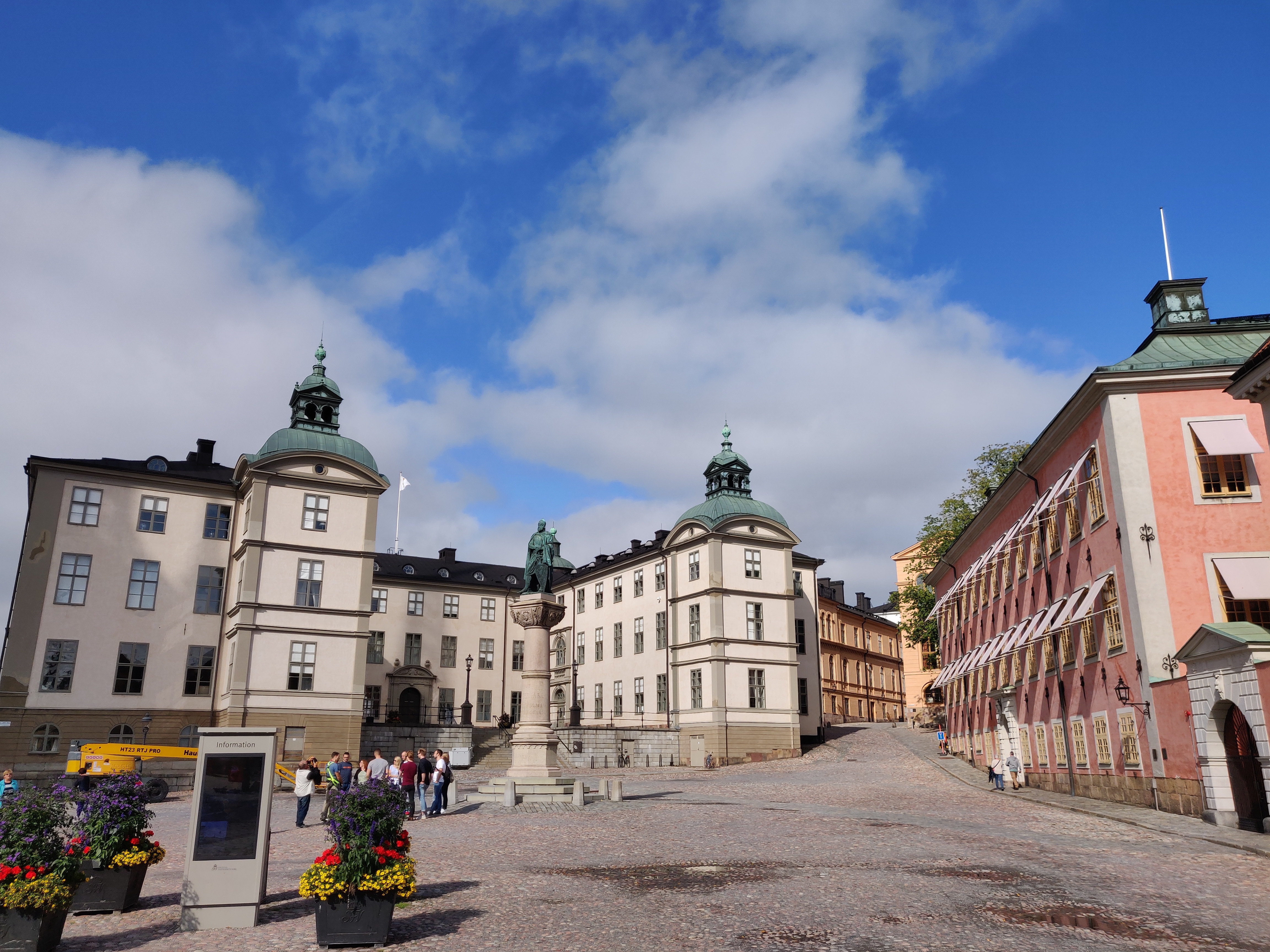 It was a beautiful, sunny day with clear skies and a nice breeze. I was scootering at probably close to 30 km/h (which feels pretty fast on a scooter), and I couldn’t help but smile.

I scooted into Old Town with my only worry that I may not get back to the hotel in time, and would miss the group of people heading back to the airport together. I had set an alarm of when I should start to head back, and cleared my mind.

I wanted to be present.

I set my scooter down, and walked through the town, viewing the architecture and basking in the beauty of the city.

I took a few pictures. Not for myself, but so I could share them with those who I know would’ve wanted to see them.

I had spent a few hours walking around, and it’s hard to put into words how I was feeling. There was a sense of freedom, and now on reflection, likely a feeling of gratitude and privilege.

While I didn’t need to visit Sweden to feel this way, I’m fortunate enough to have had the opportunity.

Now that I’ve set the stage, and provided the necessary context, let’s get into the particular story.

I wanted to purchase some souvenirs for my family and friends back home.

I looked around for a shop, and picked one that stood in one of those narrow alleys. It looked quite nice. 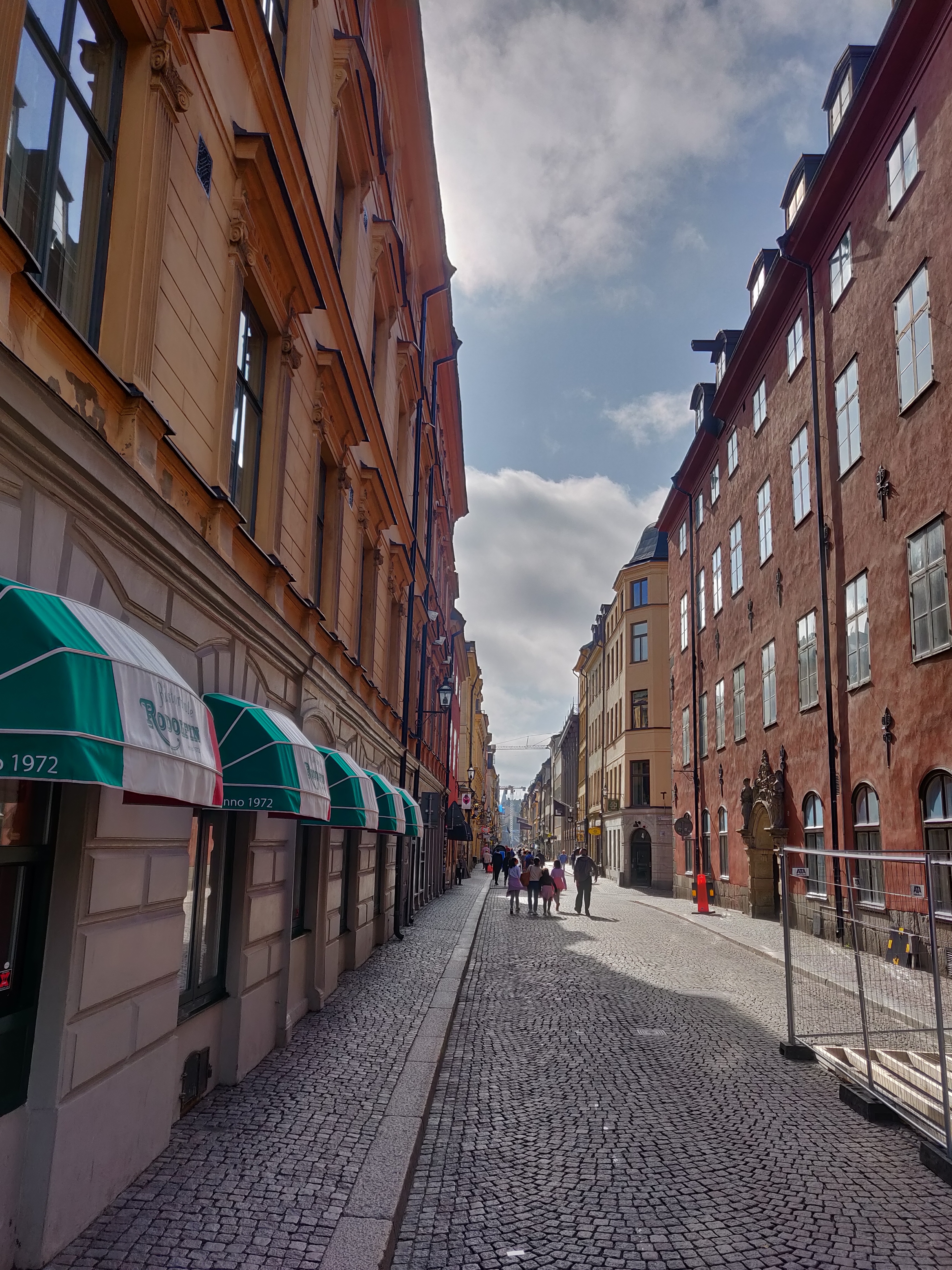 It was early, so the gentleman who owned the store was just unlocking his doors, getting ready for what was likely a full day of tourists.

Having been in Stockholm for a week at this point, I’ve observed that most locals in touristy spots spoke English, though I wanted to make sure. I probed by asking something along the lines of,

It’s here, as he turned around to respond to me, that I was able to discern that he was likely of South Asian descent, like myself.

He noticed the same of me.

While I initially probed for English, it seems he began to probe for his own mother tongue.

As soon as he realized I was South Asian, he asked

“Where are you from?”

Normally when people ask me this question, I tell them I was born in Canada, but I had sensed his intent and told him I’m of Indian descent.

He followed up by asking,

“Do you speak Hindi?”

I responded, slightly nervously knowing my Hindi skills aren’t the best, that I do indeed speak it.

It was then that the conversation came to life, living in the form of a Hindi-Urdu duet.

The man, I had later found out, is originally from Pakistan, and he immigrated to Sweden.

For those unaware, Urdu is a language mostly spoken in Pakistan, and is very similar to Hindi. So much so that two people speaking can easily carry out a conversation, as confirmed by this anecdote.

His face lit up with a huge smile, as he asked about me, and me about him.

I learned, through conversation, that the South Asian population is fairly small in Sweden, so for him to communicate in his mother tongue meant a lot – so much so that I could feel it.

The conversation continued, and while it remained fairly surface level, the emotion backing the conversation was strong. It was an everyday conversation, and yet it felt enthralling to be part of.

While talking, I had grabbed a few souvenirs, and naturally I received a desi discount.

As I pulled out two bills, he accepted one, and exclaimed,

“Rehne do, bhai”, roughly translating to, “don’t worry about it, man”.

I suppose you can say there’s historic animosity between the two countries, that is India and Pakistan, though as a Canadian-born Indian have never felt it. Likewise, it definitely wasn’t there in this conversation.

He was happy to be understood, and I suppose I enabled him to express himself in a way he hasn’t been able to in a while.

This is the underlying piece I’ve decided to focus on in this reflection.

To be understood in the way you choose to communicate requires effort from the listener.

I suppose I have a tendency to mend the other persons' communication style to better align with mine, by asking probing questions and extracting facts and logical claims.

Putting in the effort to derive meaning, without interjecting or altering the other’s way of communication can create a stronger bond and a level of respect and understanding.

I take language and understanding for granted, as in my surroundings I’m able to openly communicate in a language that’s widely accepted. For some, this is not the case, and is something to think about.

I’m grateful that I have the tools necessary to sufficiently communicate my ideas.

He ended the conversation by saying,

“Aap se baat karne se bahut khushi mila”, which translates to, “talking with you has brought me great happiness”.

It is likely a moment I won’t forget and will be part of the reason that made the solo-exploration of the trip so memorable.

As I exited the boutique, souvenirs in hand, my alarm started buzzing. It was time to head back.

I grabbed the first electric scooter I could find, and cruised my way back to the hotel. It was an enjoyable ride and I was able to take in all that I had saw coming, for what it was.

The novelty of the first glance can be overwhelming, as processing new sights can put you in an overloaded haze, if you will.

Seeing it all for the second time, though, was a very calibrating real experience.

I got back to my hotel just in time and met up with the rest of the team.

I knew I felt grateful and content – I just couldn’t identify these in the moment.