I cherish this memory greatly.

I’m apprehensive in sharing it, as I fear it will lose its novelty. Still, I write because I envision a time where I share this story with my kids of the future. If I’m unable to, hopefully they’ll find this post and enjoy the written recount (hello kiddos, if that’s you!).

One of my best friends, at the time, had signed up for the Spelling Bee and encouraged me to do so as well.

It sounded like a splendid idea, so I followed along.

The process was foreign to me, and the closest semblance I could draw was to spelling tests at school.

Upon registration, I was given a manual of – maybe 300 - words that could appear in the first round of the contest. The spelling bee is spilt into two segments. The preliminary rounds where words are picked from the official manual, and the later rounds where words can be chosen from a much broader, unknown list.

I participated in prep sessions, group studies, and mock bees leading up to the bee. Those were generally fun.

I carried the book of spelling words with me, wherever I went.

It was this large, bright, mellow, yellow book. A part of me misses the book. I hold in high regard the sentiment associated with the image of the book. This was largely because I loved the entire experience.

In preparation, I’d have my mom or dad flip to a random page and pick a word. I’d say just for fun:

“May you please use the word in a sentence?”, or
“Are there any alternate pronunciations?”.

In any case, I was asking knowing very well I wasn’t using the information (at least not consciously). It was entirely in the spirit of fun.

I’d proceed to spell the word and have my parents verify whether I spelt it correctly.

At the time, I was a superb speller, so it was rare I was incorrect (humble brag).

When incorrect, though, my parents didn’t fully grip the concept of not revealing how the spell was progressing. Their smiles would widen as I progress through the word correctly, until I projected an incorrect character, at which point their smiles would instantly fade.

I’d immediately know I messed up, at which point I’d rant on about the rules of the contest.

To my kiddos: If you’re trying to get your dad to listen or understand something, here’s an important lesson. A sentence of fewer words is often easier to digest. I used to cite the rule number, paired with a long rule. This strategy did not work.

The day of the spelling bee had arrived. I was a little bit nervous, a little bit excited – anxious is the right word.

At the venue there were hundreds of other kids. My parents and I found the registration line, and proceeded to check in.

I received a participant’s shirt, that I still wear. It was – you guessed it – yellow!

We were debriefed as a collective and, shortly after, the competition began.

Each competitor was called up in sequence and presented a word to spell. If you spelt the word correctly, you proceed to the next round. If you misspelled the word, you were eliminated.

I made it through many rounds. This segment is a blur to me. I don’t remember any of the words I spelt correctly. 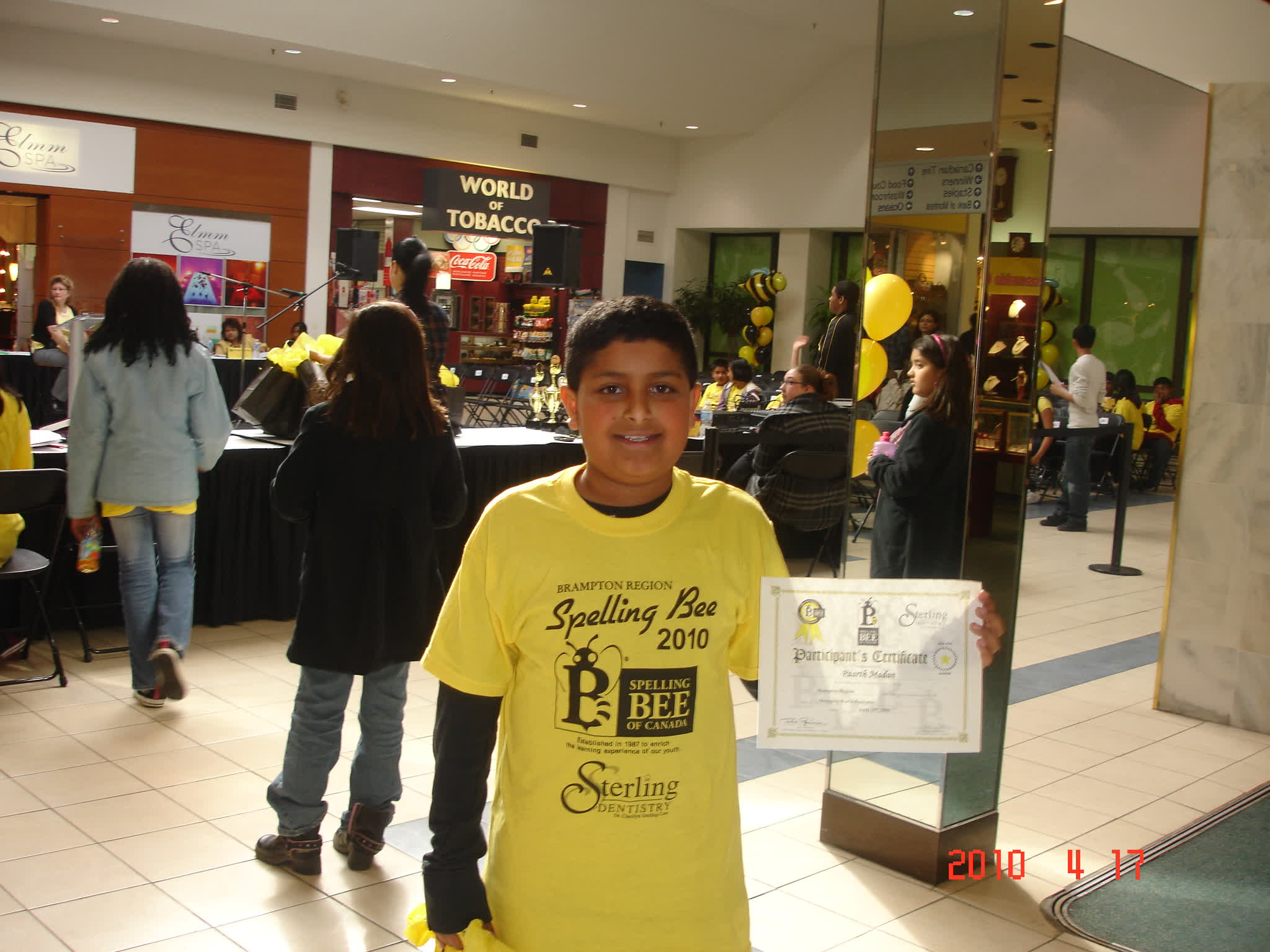 I was one of them.

Top 3 competitors receive a money prize, and advance to the Provincial Spelling Bee. I was not thinking about this. I was in Grade 5. I was hungry, picturing lunch. I was just happy to be there.

So, my name is called – it’s my time to shine. I walk on up, wlly-nilly, ready for whatever they throw at me.

At this point I had spelt a few difficult words. I suppose my adrenaline was high, my anxiety had faded, and my confidence was rising.

I approach the microphone, in front of the audience, and the announcer says:

“Your word is willy-nilly”.

In my head, I’m giddy with excitement. This word is so easy!

Immediately, without a second thought, or even a second of thought, I repeat the word:

and proceed to spell:

I swallow the first “i”.

I walked off of the stage, leaving the 3 victors behind me.

I was disappointed but, honestly, I was more concerned with what was for lunch. I was super hungry.

The best part of this story was, at the time, I didn’t make much of it. I knew I knew how to spell the word, and simply misspoke out of excitement.

I like the way my child self responded. I didn’t make a big deal, or feel sorry for myself.

It’s interesting that now, a decade later, when I recount this story I always feel like an idiot. Whoops, I mean a diot (remember to drop the first “i”).

I left, not with a prize, or an advance to the provincial competition, but a lesson and a story. A story to remind me of the consequences of letting your emotions take the steering wheel.

That day, excitement was driving a little too fast. Sometimes, your sadness might be driving, and other times it’ll be anger. You need to listen to these emotions, but have them sit in the passenger seat. Hear them out, but don’t let them take control of the wheel.

We all have our autopilot mechanism. Our fast thinking system that saves us in life critical situations, and saves our brain from thinking about everything. It’s what lets you swerve a car in an accident, or catch yourself when you’re falling.

It’s important to switch off autopilot in a time where you need your full conscious attention, though. Knowing when to switch between being in full control, and using autopilot is a skill worth mastering. It requires self-awareness and patience.

There are moments when we should be in control, but we let autopilot take over.

An argument is the perfect example of this.

We tend to just fire off on autopilot in a disagreement, without really listening or digesting the others' perspectives. This would be a good opportunity to switch off autopilot, and slow down (to the kids: like your mom and I do!).