Motorcycle: The Next Step

I participated in an 2-day motorcycle course over the weekend, where I rode a motorcycle for the first time, learned the basics, some advanced maneuvers, emergency procedures, and finally, wrote and passed the M1 exit test.

While there’s a lot to write about the technicalities of motorcycling, I think it’s far more interesting to explore my feelings.

On review, I can identify a few distinct feelings that arose throughout the weekend:

I’ve been dreaming of riding a motorcycle since, really, as far as I can remember. Prior to the weekend starting, I was extremely excited. Visualizing what the sensation would feel like, drawing up scenarios in my head of how it’d progress – I was just very excited.

With the excitement, though, came some anxiety. I think excitement and anxiety are two sides of the same coin, and there’s an extremely fine line – perhaps even an interplay – between the two feelings. They are both rooted in anticipation, but one tends to favour the positives, while one, perhaps, the negatives.

As excited as I was to start, I had built a level of anxiousness, filled with the thoughts of the associated dangers, whether or not I’d actually like it, or if it would technically difficult.

COVID-19 also played a small (large?) role in building up my level of anxiety, as the last outcome I would’ve wanted is to have acquired the virus for an optional, completely recreation activity, and to have brought it home with me.

Fortunately, the course was completely outdoors and everyone was, naturally, spaced at least the length of a motorcycle, which was sufficient – hopefully.

It was Saturday morning, and the weekend had finally started. The course started fairly early, so I was up just around the closing of the 5th hour.

It was a chilly morning, so I had to let the car warm up significantly before taking off. That was the first of it’s season, which was a bitter sweet feeling as it was time to wave goodbye to the summer season, and welcome fall with open arms.

I had reached the venue on time and started my registration process.

I was instructed to line up by a set of bikes, and pick one. At this point, most bikes were taken, so of those remaining I selected the nicest-looking, highest power, dirt-bike.

Ideally, I’d pick a bike that I intend on riding, like a sport bike, but there were only a few available, and they were already occupied. I had figured a dirt-bike would do and in retrospect, this was a great idea. I could learn all the technicalities on an older, less technologically advanced bike, so that when I do eventually ride a newer, larger sport-bike, I can ride it with ease. 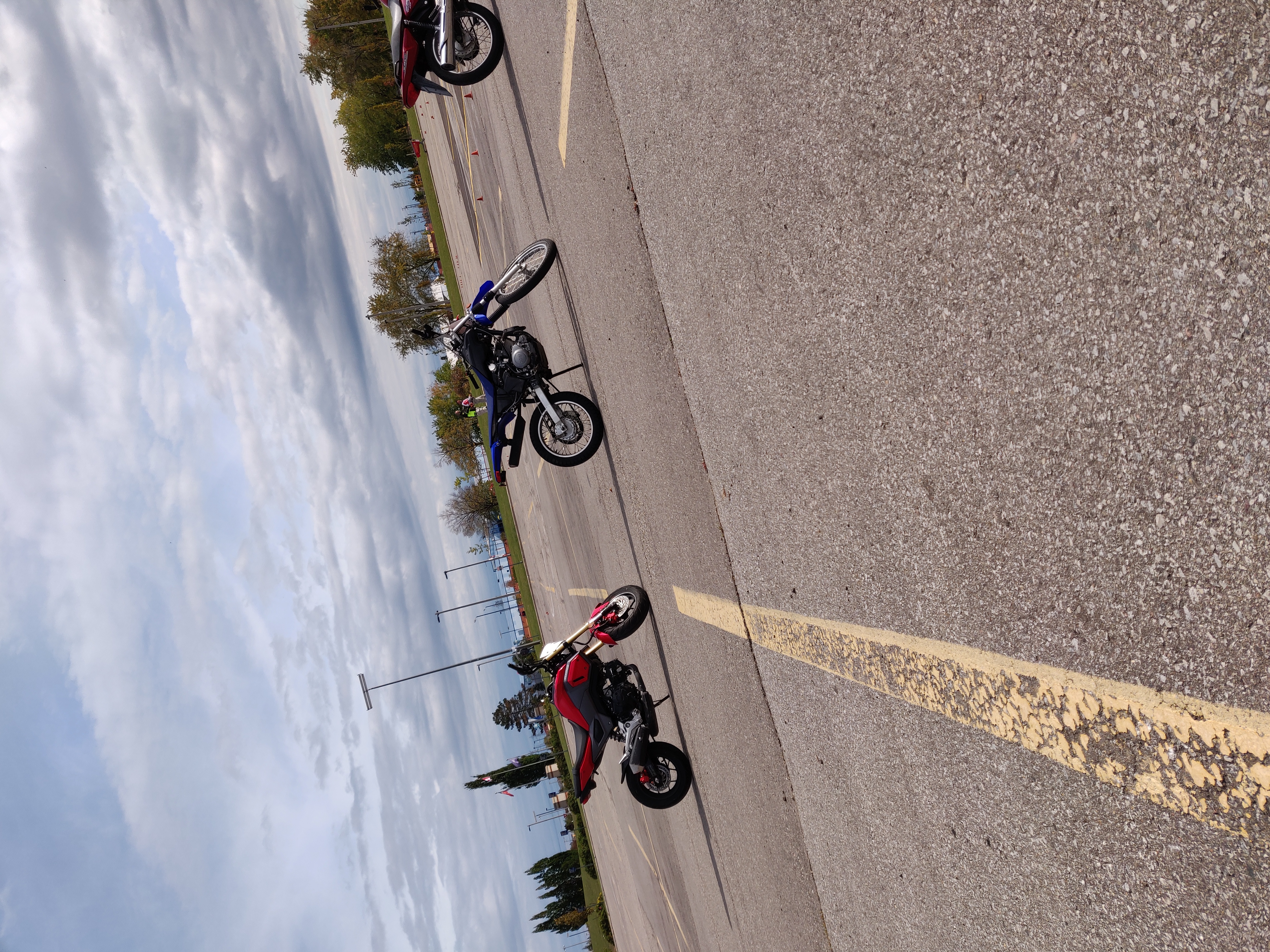 As we began the course, and the riding portion of the day, my excitement resolved to joy. I couldn’t help but feel joyful for the opportunity I had to realize my dream, and the fortune I possess to be able to do it on my own account. I wanted to make it a point to express my gratitude, for I’m the first to realize this experience as a mere signal of privilege.

The feeling was as such:

I hadn’t ridden a motorcycle before, and yet, for some reason, I knew exactly how it’d feel. It’s a unique sensation, one I had yet to experienced, but when I rolled the throttle entirely back – against the instructor’s will – I had entirely anticipated what it’d feel like.

Granted it was a very joyous experience, still the novelty aspect was not nearly as high as I would’ve expected. Perhaps that’s because I’ve been envisioning the experience for so long, the novelty didn’t live up to that expectation.

I thought this was an interesting point to reflect on, and maybe it speaks to the following fact:

When something consumes you, as in this case my desire to ride motorcycles, regardless of how well that experience went, nothing can fulfill that expectation you draw up in your head. It reminds me of a concept like Platonic Realism where the perfect concept lives only in our minds.

As my excitement resolved to joy, my anxiety resolved to fear. Motorcycling is a dangerous activity, and the instructors were very stern, and clear about this. When you’re accelerating the bike through a turn, and leaning the bike far enough that your elbow is close to touching the ground, the obvious thought in anyone’s mind is – what happens if my bike slips?

The fear of falling, colliding, slipping, or mishandling the bike is important. Fear demands focus, and riding a motorcycle demands utmost focus.

While we tend to suppress fear, or activities that cause fear, I think the very reason that motorcycling is so exhilarating is the fear. It guides you, and if you lean into (pun completely intended) – the fear that is – you lean into the present.

I haven’t ridden enough to know if motorcycling will be something that I do. Unfortunately, in Canada, October is officially the end of motorcycling season. Thus, any plans to purchase or continue to ride will be postponed to perhaps late April.

While waiting will be hard, at least I’ll have something to look forward to.

I plan on buying something like a CBR300R, but I’ll reflect on what I buy as I near the riding season.