A year ago, I went for a haircut.

I came back with a nice fade, new found confidence, and a car crashed into mine.

As it would turn out, two cars driving on the main road outside the parking lot collided.

One spun with such force that it ascended the boundary of the parking lot, and landed in my parking spot.

Fortunately, there were no serious injuries.

The cars, on the other hand, weren’t so lucky. The offenders car, not pictured below, was totalled. The car that spun into mine was spared. 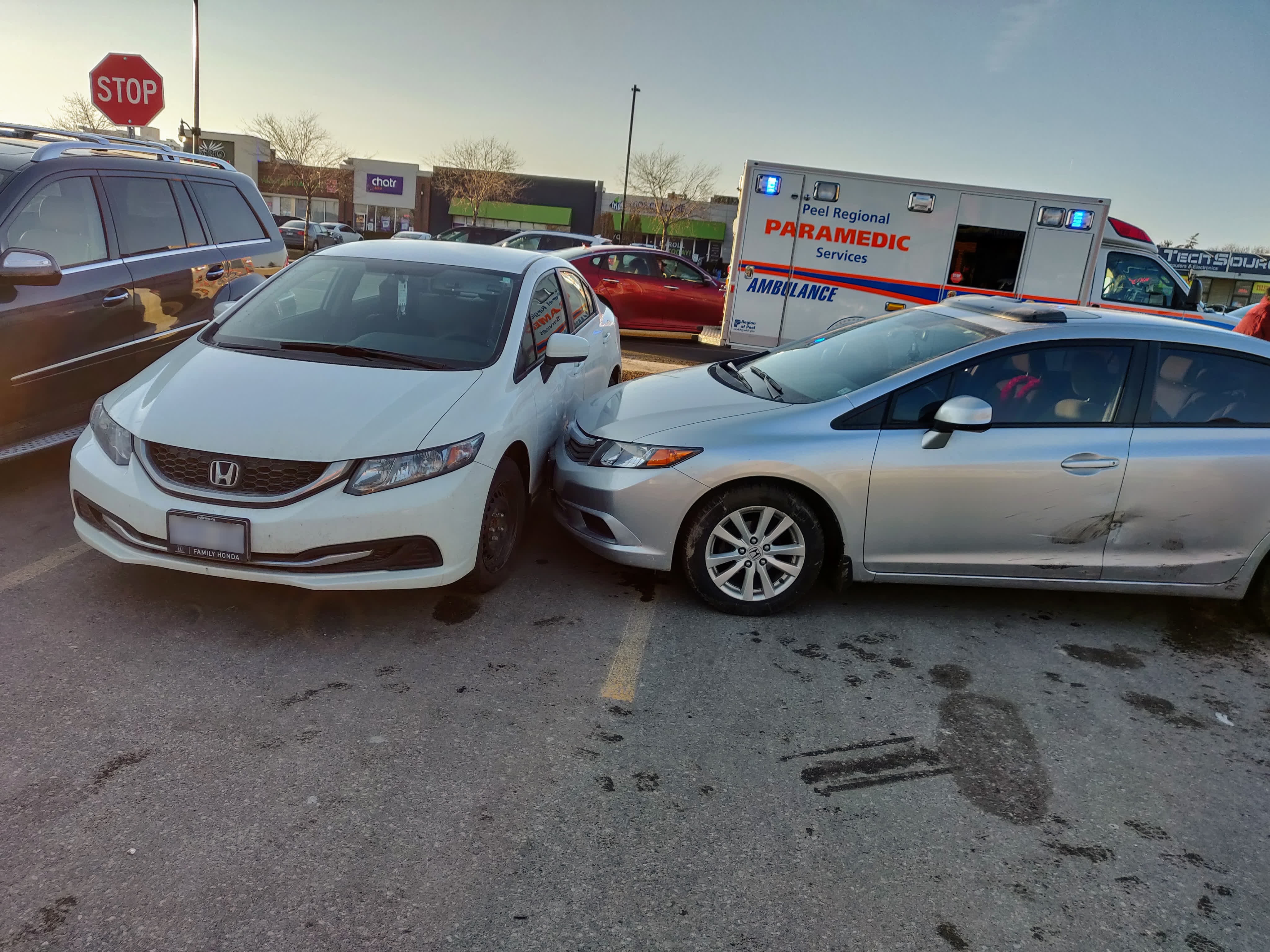 It’s interesting to think that only:

a few seconds,
a few centimeters,
a few kilometres per hour,

could’ve influenced whether there were fatalities that day.

I wished my barber a good evening as I swung the door open with some swagger. Then, I saw the scene.

I was stunned, so I didn’t really process anything at all. I just threw on my hat, as one does after a haircut. I learned my car was involved, and quickly collected myself.

I walked to the officer.

He requested that I stay back. I voiced that my car was involved in the crash, pointing at the car that was currently inside the driver’s side of my Civic.

He apologized and explained that I was a secondary entity involved in the accident. He needed to corroborate the story of the main parties involved. He’d talk to me towards the end.

My concern was my car. I wanted to ensure that I could be placed on the police accident report, to ensure I don’t face detrimental consequences with insurance.

I wasn’t sure how long it’d take to clear up the scene, so I pinged my parents and let them know what had happened.

The rest of the story is pretty boring.

I think the emotional aspect is more interesting here.

First, let me point out that hair cuts seem to be particularly interesting days for me. In the last 5 years, I’ve gotten – perhaps – 6 or 7 haircuts? On one of those, I broke my shoulder. This particular time, my car breaks.

I haven’t explored the supernatural in detail, so I can’t concretely assert my belief in it. Perhaps, that’s a set of posts for the future.

Anyways, what I do know is that, even probabilistically, the events are slim.

I observed a few emotions throughout.

Fear sprouts from lack of knowledge. Initially, I lacked an understanding of what was going on. I see my car and another car, together. As I acclimated to the situation – learning first responders were at the scene, and there was a clear way to proceed – the fear dissipated. It only lasted a few seconds.

I felt confident. I could handle the situation, assert my presence on the scene and make sure my car was represented. The police officer’s primary goal is to process the two cars involved. I need to ensure that my car was present on the report as it acquired damage, too. As it would turn out, this required persistence.

I felt oddly detached from the material aspect. I wasn’t worried about my car or that it got damaged. I was relieved that no one was hurt, and that was where my primary concern lied. Everything else was secondary.

I felt grateful that I could be detached. I worked hard for my car, sure, but I know an accident could be far more damaging financially to others. I think detachment is a privilege. I like to think I’d feel detached regardless of my circumstance, but I may be delusional.